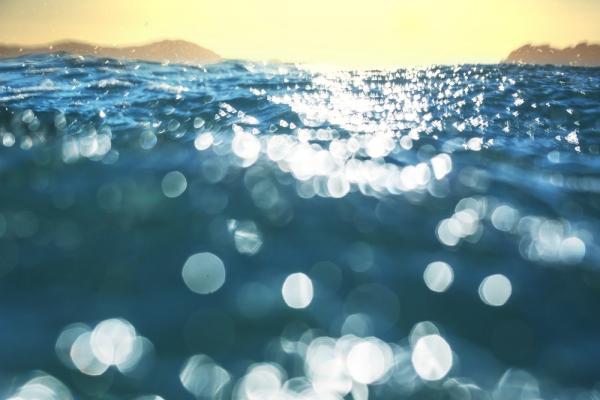 The types of ocean bacteria known to absorb carbon dioxide from the air require more energy – in the form of carbon – and other resources when they’re simultaneously infected by viruses and face attack from nearby predators, new research has found.

Viruses are abundant in the ocean, and research now suggests that marine viruses have beneficial functions, including helping to drive carbon absorbed from the atmosphere to permanent storage on the ocean floor. When viruses infect other microbes in that environment (and anywhere, in fact), the interaction results in creation of entirely new organisms called “virocells.”

In this new study, researchers worked with cyanovirocells – cyanobacteria that absorb carbon and release oxygen through photosynthesis that have been infected with viruses. The analysis of changes in the infected bacteria’s gene activation and metabolism under lab conditions designed to mimic nature hints at an intriguing possibility: The dual threat of viral infection and drifting among hungry predator microbes might lead cyanovirocells to take in more carbon.

“More energy for these organisms probably means more CO2 fixation, so I would speculate that carbon sinking and carbon sequestration from the atmosphere is greater because of the interaction between predators, photosynthetic bacteria and viruses,” said Cristina Howard-Varona, first author of the study and a research scientist in microbiology at The Ohio State University.

The study was published online recently in the journal ISME Communications.

This work marks the first time researchers have observed these bacteria while they’re simultaneously infected with viruses and floating in the presence of organisms, called protists, that eat them.

“The ocean covers 70% of our planet and buffers us against climate change – and below the surface, there are all these complex interactions that we know so little about,” said Matthew Sullivan, co-senior author of the study and a professor of microbiology at Ohio State.

“What we’ve learned is that these photosynthetic bacteria, which are the most important player for climate change in the oceans, are not just living their own lives. They’re being attacked by bigger organisms that eat them and much smaller ‘organisms’ – the viruses that infect them,” Sullivan said. “What is so interesting is that virus infection completely transforms a single-celled organism into these virocells, and we’re just now beginning to understand how virocells contribute to marine cycles and affect climate change.”

Using a variety of computational techniques, the researchers saw significant differences in the infected bacteria’s gene expression and metabolism-related molecules when the protist predators were introduced to the marine water environment – and noted that some of those changes were traced to the infecting virus inside the cell, suggesting the protist’s presence could be sensed by the cyanovirocell.

“The entity that comes out of the viral infection – the cyanovirocell – has a whole different metabolism and lifespan, and it cares about different functions,” Howard-Varona said. “And in the presence of the larger protist, these virocells require more resources and more energy to survive. You have to see all three players at the same time in order to see the increase in energy demand.

“As part of that, the virus needs more energy to create more copies of itself – but where is it getting it? It’s fixing carbon, which is converted into sugars, and sugars are burned as energy.”

The cyanovirocells were also releasing metabolism-related nutrients into the water, which were eaten by the protists – observations that had never been made before.

Microbes in the ocean do the work of absorbing half of the human-generated carbon dioxide from the atmosphere and producing half of the oxygen we breathe – but there is still a lot to learn about all the ecosystem factors at play in that process.

“This work represents baseline data that is important for building out our understanding for how carbon cycling works in the oceans, and the role viruses play,” said Sullivan, also a professor of civil, environmental and geodetic engineering and founding director of Ohio State’s Center of Microbiome Science.

The research was supported by the National Science Foundation, the Gordon and Betty Moore Foundation, an Arnold and Mabel Beckman Foundation Postdoctoral Fellowship, and the Office of Science of the U.S. Department of Energy.