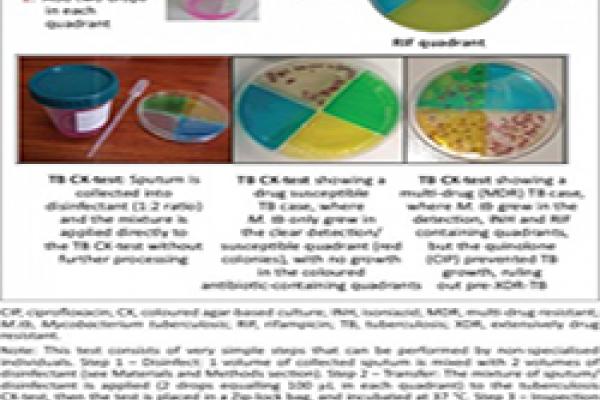 A study of the $2 test in rural Malawi in southeastern Africa found that it was reliable and could be easily employed in areas with a high incidence of tuberculosis, said study author Jesse Kwiek, an associate professor of microbiology at The Ohio State University.

The TB CX-test is designed to not only detect tuberculosis, but to determine whether the infecting strain is resistant to any of a handful of antibiotics used to treat it. In this study of 96 people at high risk of TB, however, drug-resistant forms of the disease were not detected, and further studies are underway to assess the role the inexpensive test could play in identifying the best route of treatment, Kwiek said.

The study was published in the African Journal of Laboratory Medicine.

Tuberculosis is a bacterial infection that usually attacks the lungs, but also can harm other parts of the body, including the kidney, spine and brain. Not everyone infected with TB bacteria falls ill, but in those who do, untreated TB can be fatal.

An estimated 4,000 people die of tuberculosis each day worldwide, according to 2017 estimates from the World Health Organization. Malawi is among 20 countries the WHO has classified as having a high number of people infected with both TB and HIV. Most cases there are diagnosed based on clinical symptoms and simple cell culture tests that do not reveal any details about whether the infection is drug-resistant.

To run the new experimental test, a health care provider collects a phlegm sample from the respiratory tract of a person with suspected tuberculosis and uses a dropper to place samples in four compartments on a round plate. After about 10 days to two weeks in a temperature-controlled environment, TB (if present) bacteria show up in at least one quadrant.

Each of the other three quadrants (which are color coded) contains one of three antibiotics used to treat the infection: ciproflaxin, isoniazid or rifampicin. If the bacteria grow in any one or more of those three compartments, the test shows that the tuberculosis is resistant to one or more common treatments. The test was developed by study co-author Carlton Evans of the Imperial College of London and Cayetano Heredia University in Peru.

The new diagnostic test provides more information than the most commonly run test worldwide, in which phlegm is spread on a slide and examined later for TB, Kwiek said, but isn’t as expensive as more-costly gene-based diagnostic testing that is rarely found in low-income and middle-income countries.

“The diagnostic approach that is typically used in the field doesn’t tell you anything about drug susceptibility, and knowing that is key to effectively treating infections of antibiotic-resistant tuberculosis,” Kwiek said.

The advanced molecular tests used in the U.S. and other wealthy countries are excellent, but they aren’t accessible to much of the world because they are expensive and require specific supplies and training, he said. In Malawi, each sample would cost about $18 to test using the WHO-recommended GeneXpert test.

“This new $2 CX-test is fast, effective and cheap and enables clinicians to know about drug resistance up front so that they can personalize treatment,” Kwiek said.