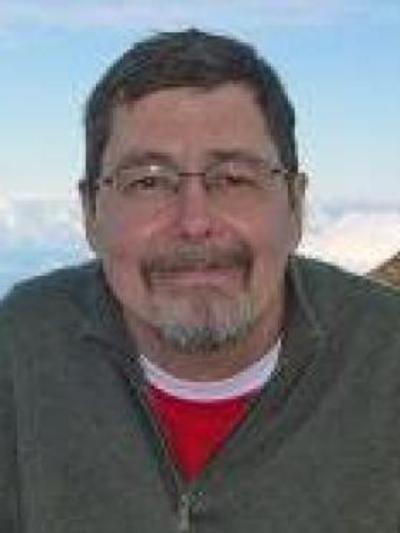 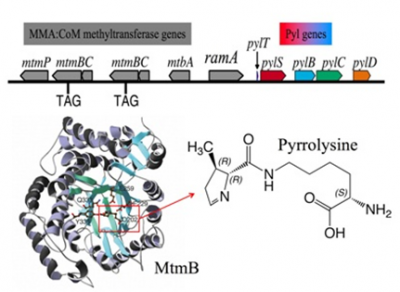 Methanogenesis and Pyrrolysine, the 22ndAmino Acid

Our lab is interested in the biochemistry of biological methane production by methanogenic Archaea. People are drawn to research on methanogens for a number of reasons. These microbes inhabit anaerobic environments like freshwater and marine sediments or municipal waste digesters. In these environments, methane formation is a critical final step in the degradation of organic matter. Methanogenesis produces cellular energy even while producing a human energy source. Methanogens are the charter members of the Archaea, a Domain of life evolutionarily separate from Bacteria or Eucarya. Befitting this unique evolutionary status, methanogens possess an unusual biochemistry and molecular biology, and have evolved distinctive cofactors and enzymes to form methane. In recent years we have shown that some methanogens have even changed their genetic code to suit the needs of methanogenesis. To use methylamines to make methane, they synthesize proteins possessing an unusual amino acid call pyrrolysine. Pyrrolysine is inserted during translation, making it the 22ndamino acid found to have entered the genetic code. While we first found pyrrolysine in methanogens, evidence for pyrrolysine has now been found in nine different genera of Bacteria and Archaea, including a human gut bacterium.

Our lab began studyingMethanosarcinaspp. because this genus has evolved an expanded range of substrates that includes, among other substrates, methylamines such as trimethylamine, dimethylamine, and monomethylamine (MMA). These methylamines are produced from the breakdown of lipid components or cell osmolytes and are abundantly produced in some fresh and marine waters. We used classical biochemical techniques to identify proteins converting the three methylamines to methyl-Coenzyme M (CoM). Methyl-CoM is the precursor of methane, carbon dioxide, and much of cellular carbon. Three types of methylamine methyltransferases use specifically either trimethylamine, dimethylamine, or monomethylamine to methylate a partner corrinoid protein, which are then substrates of a fourth methyltransferase which forms methyl-CoM. As we characterized the proteins and sequenced their genes, we were surprised to find in-frame amber (TAG) codons interrupting the genes encoding each type of methylamine methyltransferase. We established that the amber codons are translated inMethanosarcinaspp. Our lab then collaborated with Michael Chan, who solved the structure of MtmB, the MMA methyltransferase, and deduced the structure of the new amino acid corresponding to the amber codon. We named the new amino acid pyrrolysine.

The Genetic Encoding of Pyrrolysine

Our subsequent studies have shown that pyrrolysine directly entered the genetic code much like the original twenty amino acids. Pyrrolysine has its own tRNA (called tRNAPylor tRNACUA) that can decode UAG during translation. A gene calledpylSfollows the tRNAPylgene in the methanogen genome. The protein made frompylSis a pyrrolysyl-tRNA synthetase. That is, this enzyme attaches chemically synthesized pyrrolysine directly to tRNAPyl, a key step that allows pyrrolysine entrance to the genetic code. We demonstrated that methanogenpylSandpylTfunction not only in vitro, but also in vivo inE. coli. This set the stage for later exploitation of PylS and tRNAPylto insert useful chemically modifiable residues into recombinant proteins, a strategy now pursued by a number of labs.We have found the methanogen still uses UAG as a stop codon; and a balance exists between use of UAG as a stop codon and a sense codon withinMethanosarcina acetivorans. Downstream sequences can enhance UAG read-through in at least one methylamine methyltransferase transcript, but amber codons are translated in foreign reporter genes as well, probably via amber suppression by tRNApyl.

Nearby the pyrrolysyl-tRNA synthetase and tRNAPylgenes are three morepylgenes,pylB,pylC, andpylD. The enzymes from these genes are responsible for making pyrrolysine from common cellular metabolites. We have shown that transfer of the these three genes, along withpylTandpylS, allows a common bacteria likeE. colito make pyrrolysine and insert it into protein under the direction of UAG codons. In other words, these five genes program the bacteria to make pyrrolysine and incorporate it into its genetic code. We recently used this recombinant system to elucidate pyrrolysine biosynthesis. We have shown pyrrolysine is made entirely from lysine, and have proposed a pathway in which PylB converts lysine to a methylated ornithine derivative, which is joined to another lysine by PylC, before oxidation by PylD results in the formation of pyrrolysine. This work has set the stage for detailed in vitro analysis of the enzymes. These results also have implications for both understanding the evolution of the genetic code, as well as for the practical applications of pyrrolysine derivatives in production of recombinant proteins with chemically modifiable residues.

Function of Pyrrolysine in Methylamine Methyltransferases

RamA, a Novel iron-sulfur Protein that Activates the Methylamine Methyltransferases.

Burke SA,Lo SL &Krzycki JA.(1998) The clustered genes encoding the methyltransferases of methanogenesis from monomethylamine. J. Bacteriol. 180:3432-3440. (The first description of an amber codon in a methylamine methyltransferase and the hypothesis that it might encode an unusual amino acid).