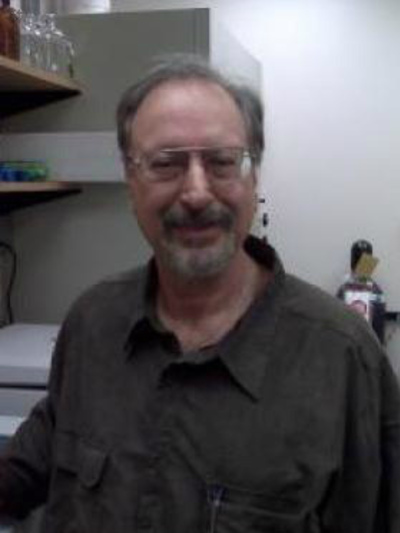 Microorganisms are important agents for carbon sequestration and biofuel/bioenergy production on earth. My laboratory is concerned with the molecular regulation, biochemistry, and enzymology of carbon dioxide assimilation and the application of this knowledge to favor the production of energy-rich biofuels by microorganisms from CO2.  All organisms require CO2 and many enzyme-catalyzed reactions employ CO2 as a reactant for processes as important and varied as carbohydrate metabolism, lipid biosynthesis, and the production of important metabolic intermediates for the cell.  Most importantly, CO2 may also be employed as the sole source of carbon by a large and diverse group of organisms on this planet.  For this reason, CO2 fixation is a process that is associated with global issues of health, agricultural productivity, carbon cycling, and industrial productivity.  As the chief greenhouse gas in the atmosphere, CO2 is also recognized and implicated in the general warming of the earth's biosphere.  For all these reasons, research on various aspects of CO2 fixation control, biochemistry, and ecology have attracted wide interest. In addition, these studies, and the subsequent manipulation of various molecular control mechanisms, have led to the development of promising microbial systems for the production of biofuels and bioenergy from CO2. The following summarize our ongoing and future efforts to probe various aspects of these issues.

The key and rate limiting step in global CO2 assimilation is catalyzed by the enzyme RubisCO. This enzyme is a very poor catalyst, yet it is the protein that actually fixes the bulk of CO2 on this planet, and is thus most responsible for the biological removal of CO2 from the atmosphere. In addition, RubisCO function directly correlates with plant and crop productivity as well as the growth and reproduction of many significant microbes in the biosphere. The major issue that we study is the basis by which RubisCO discriminates between CO2 and O2, two gaseous substrates that compete for the same active site on the protein. This is a very important issue as O2 normally prevents efficient CO2 fixation. Taking a combined molecular biological and chemical approach we have attacking this problem by constructing novel mutant enzymes with different sensitivity to oxygen. RubisCO and a related protein, the RubisCO-like protein (RLP), also are involved in sulfur salvage reactions in the cell. We are engaged in determining the roles of RubisCO and RLP in sulfur metabolism and determining how the active sites of these proteins accommodate novel substrates.

We are interested in how the CO2 fixation (cbb) structural genes are regulated in bacteria, using the metabolically versatile nonsulfur purple bacteria as model systems. In these organisms, the entire cbb regulon is under the control of a specific transcriptional regulator gene, cbbR, whose product, CbbR, positively controls the transcription of the two major operons required for CO2 fixation. In order to turn on transcription, CbbR must be activated in the cell after it binds to specific effector molecules. Understanding the biochemistry of CbbR is thus an important part of this research. In addition, response regulator proteins from specific two-component regulatory systems also impinge on control and these response regulators are able to interact with CbbR to fine-tune the regulatory response. How these different regulators influence the function of CbbR is a major thrust of our laboratory as understanding the means by which these proteins influence the control of CO2 fixation is important for elucidating the overall regulatory mechanism. Moreover, the potential manipulation of these control mechanisms directly influences the type and amount of value-added products that might be made from CO2. 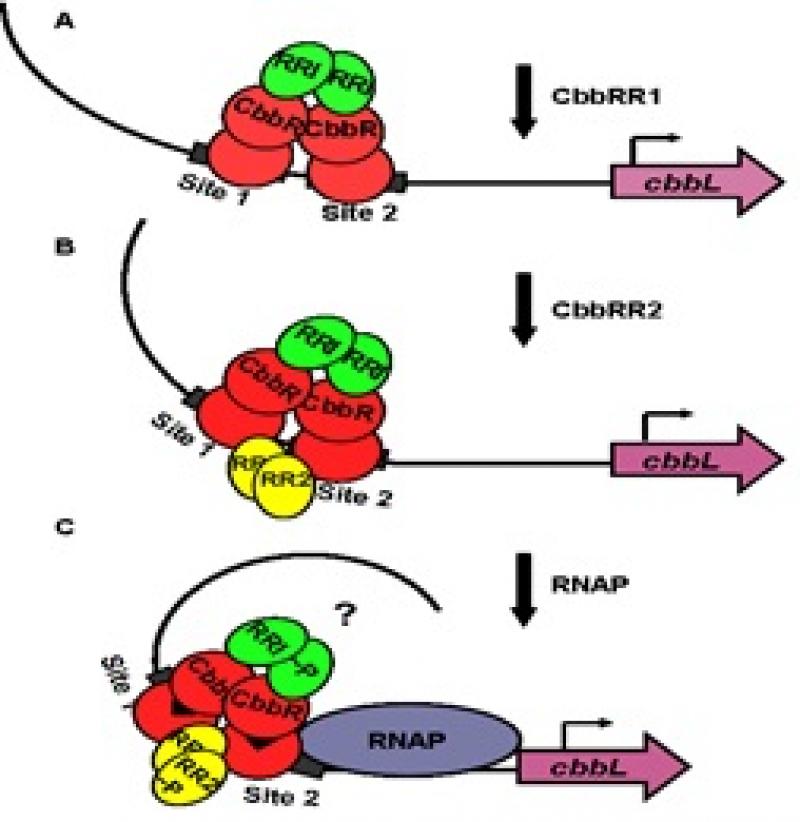 We are deeply engaged in using knowledge of the biochemistry and molecular biology of CO2 fixation in both chemoautotrophic and photosynthetic bacteria to enable efficient bioconversion of CO2 into infrastructure-compatible liquid biofuels. These organisms are attractive for such manipulations as they are genetically tractable and use electrons stripped from the oxidation of various substances to reduce CO2 to organic compounds. Using a synthetic biology approach, we are engineering these organisms to maximize CO2 fixation such that various products, including biofuels, may be produced.

Integrative control of the CO2 fixation (cbb), nitrogen fixation (nif) and hydrogen evolution systems; production of H2 as a biofuel

An interesting aspect of our studies on cbb control in photosynthetic bacteria was the finding that the nitrogen fixation (nif) system, and its control, is intimately involved with a global regulatory system, the Reg/Prr system. Indeed, knocking out the cbb system, under conditions where CO2 is normally used as an electron acceptor and not a carbon source, causes these organisms to evolve mutations that allow derepression of nitrogenase synthesis and expression of the nifHDK genes, so that reducing equivalents may now be dissipated as a result of the H+ - reducing hydrogenase activity of nitrogenase.  Thus, the organism exquisitely controls how it handles environmental signals related to carbon and nitrogen metabolism.  This results in the production of copious quantities of hydrogen gas and over the years we have shown this to be the case for four different nonsulfur purple bacteria that we have studied. Hydrogen is a biofuel of enormous potential significance and our basic mechanistic studies are designed to optimize this process further.

We have collaborated with marine scientists to understand how the regulation of key CO2 fixation genes, like the RubisCO genes, are controlled in the oceans. This work, a combination of ship-board and laboratory investigations, is devoted to a primary problem, namely the sequestration of CO2 in the environment. Procedures for the direct examination of RubisCO transcripts in the open ocean were developed and applied to the global CO2 fixation problem. As these studies unfolded, it became possible to identify organisms which contribute to active CO2 fixation and sequestration by amplifying and sequencing specific RubisCO transcripts via RT-PCR technology. These studies have also evolved to the point that we are able to isolate and select novel and potentially useful RubisCO genes from metagenomic libraries obtained from this and other environments. Bioselection of RubisCO genes with different properties from the vast body of uncultured organisms provides a significant tool to understand how the active site of this key enzyme has evolved for its particular function. Such studies have the potential to greatly impact the enzymological studies discussed above.